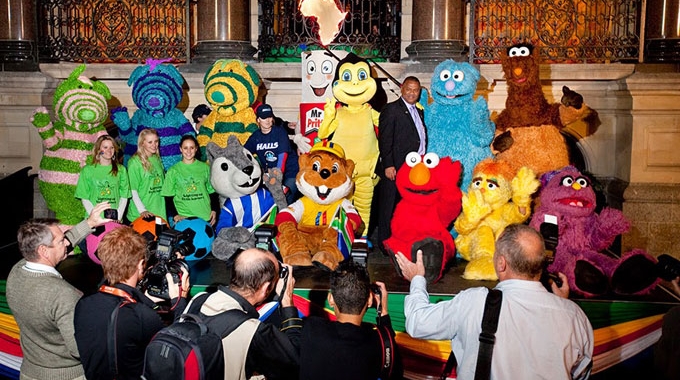 A Little Bit of Character

Did you know that Brad Pitt’s first job required that he covered his face? In addition to working as a furniture mover and chauffeuring a limo for a strip-o-gram service, now-famous family man Brad Pitt also dressed up as a chicken for bills. He dropped out of the University of Missouri’s journalism school to pursue an acting career in Hollywood, but wound up withstanding 100-degree temperatures outside of an El Pollo Loco restaurant on Sunset Boulevard. Pitt handed out flyers for the chain restaurant, according to People magazine, in full poultry garb.

Well, Brad, we’ve been there too! One of Show Works’ offerings is that of CHARACTER MANAGEMENT. We have been responsible for many much-loved characters, including Mr Pritt, Cartoon Network, Takalane Sesame, Spur Soaring Eagle, Buggles from Cavendish, The Cape Gate Gators and the BBC Fimbles. We source and train actors to perform as these characters, where they appear at family days, festivals, corporate launch events, brand activations and parades.

Now, getting dressed up in a big padded suit and walking around waving at people is not as easy as it sounds. It is as FUN as it sounds, but not easy. It comes with a huge responsibility, as the ‘character’, you are the embodiment of a personality the reflects a company’s brand. You are the brand-on-show and you need to at all times do it justice and genuinely sell it to the people you come into contact with. And you need to sell it silently! Yep, characters never talk. (How disconcerting if a female South African accent came out of Johnny Bravo!) Their handler’s talk for them as they mime away, dealing with the people that the character meets. Inside the costume, you are hot. Hot and sweaty. Hot, sweaty and happy because you know you are losing weight while baking away and jumping around like a mad thing! The best part as an actor is that in a character suit you can give the most outrageous characterisation that you could ever imagine, giving the biggest craziest performance, all behind the safety of a mask, remaining completely anonymous.

The handler’s job is not easy either… they have to manage the hordes of people flocking to meet their character, protect the character from the inevitable idiot who wants to use it as a punching bag (why, I ask you why?!?), help communicate the brand’s message, and guide their basically-blind character (when you’re in a a suit you often have a tiny dot in the nose to look through) from falling on their face. As a handler you also have to secure a safe and private dressing room for your character, where no one can spy on you and catch you unawares, because the first rule of character performing, is DON’T GET SEEN HALF DRESSED! It is imperative that the illusion of the character is never shattered – especially for children who believe that Kami from Takalani is a real live fluffy animal. For a child to see her in pieces, or half dressed, would be a very sad and traumatic experience! We can only imagine how many confused little kiddies there were after seeing this…

At Show Works we always ensure our characters keep their heads about them! We love our characters and enjoy every minute of the limelight they bring! And also the many more minutes of sweat, heat and exhaustion!

Our Busiest Month to Date

Our Busiest Month to Date August was busy. Busy, busy, busy. Busy-as-a-bee-busy. No, busier than…

Mauritius Baby! This June, Show Works took our business internationally. We had the distinct privilege,…

It Doesn’t get Bette-r than Lucy