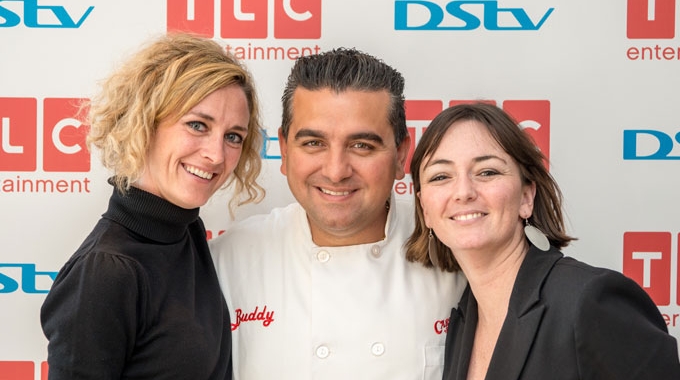 This past week was a biggie in the Show Works books. Big client, big events, big stress, big fun! We had two high profile events on the cards, both for our fantastic client Discovery Networks. Discovery hosted a stand at the Good Food and Wine Show in Jhb this past weekend. The stand showcased two of Discovery Networks’ most-loved channels: TLC Entertainment and Discovery Channel. The stand featured a filming booth where guests could leave lines to camera for their favourite channel, with the hope that their message would make it onto the channel’s promo line-up. The stand also hosted a press event with Buddy Valastro: The Cake Boss. People came in hordes to see him and he did not disappoint!

Buddy was in South Africa to launch his new range of “Cake Boss” merchandise and appear at the Good Food and Wine Show. Discovery Networks also held a TLC Channel client event where guests were treated to a cake-decorating demo by the man himself. They then broke into teams and tried their hand at matching his skills. He took time to judge each cake and awarded a winner. Guests all had the opportunity to interact with Buddy and raved about his larger-than-life personality, and how much they loved the day spent with him.

Well, they weren’t the only ones… we also loved our day spent with him. Over the years we have racked up quite an impressive number of celebrity meetings, including Dynamo, Oprah and many more. (Click here to see our hall of fame). This is the second time that we met Buddy Valastro and we have to say that this was our favourite famous-person-encounter yet. Often the ‘talent’ are whisked in and out of the event, and although we are always lucky enough for a photo and a handshake, it is seldom that we have the kind of time that allows us to get to know a little bit more about them than just their image. With Buddy, we had a whole day. A whole, lucky, wonderful day.

He flew in from NYC early on Thursday morning, after a connecting flight from Vegas, so he arrived pretty buggered, with an entire day of press events and interviews ahead of him. He had every right to be grumpy. But, he wasn’t! Not in the slightest. He greeted each of us with a big warm bear hug and double cheek kiss (no handshake here!) and very quickly pulled out his phone to show us the latest pics of him and his son skydiving. He has a 4 kids and a beautiful wife, and he is very proud of them and talks happily and openly about how important family is to him. Being invited into his dressing room to view photos on his phone felt very intimate and totally surreal. You’re thinking, this is Buddy Valastro, world famous Cake Boss, millions of fan watch him every day, he could demand the world and get it. But all he wants to do is show you pictures of his kids. Just like a normal dad.

He genuinely seems to love people and very definitely loves the people that share his trade. When we arrived at the venue of the Client Event and Cake Demo, we needed to whisk him in as quick as possible as his flight delay had meant a schedule delay and guest were waiting for him to arrive. But, no such luck, he would not be whisked. (hehe, baking pun!). The event took place at a culinary school and Buddy made sure to greet every single student and cook he encountered, calling them all ‘Chef’ and delighting in the comarderie he felt with his kinsmen. He made many a young novice’s day, that day. Nay, week, year!

So, he’s lovable and funny and warm and welcoming. But that is not all. He is also an incredible performer and consummate professional who delivers his absolute best for his audiences and the camera. His itinerary was jam-packed that day: a press event at the GFWS, one-to-one press interviews, a cake-demo at a client event, a cake-off which he judged, a photo session with all guests, a live skype chat and a film shoot where he did lines-to-camera for upcoming TLC programming. All this after a 24hr flight from the States! Shew! As the day wore on his energy, naturally, began to ebb. When he had moments alone he would just sit quietly and rest, looking completely and understandably shattered. But, the instant the camera was on, or a guest was there, he sprang to life, to larger-than-life, like an animated cartoon character, giving everyone a taste of his effervescent personality and indefatigable charm. He truly dominated that day, like a BOSS… a Cake Boss!

Mauritius Baby! This June, Show Works took our business internationally. We had the distinct privilege,…

Double Shot Latte Please May has been a month full of surprises. It started pretty…