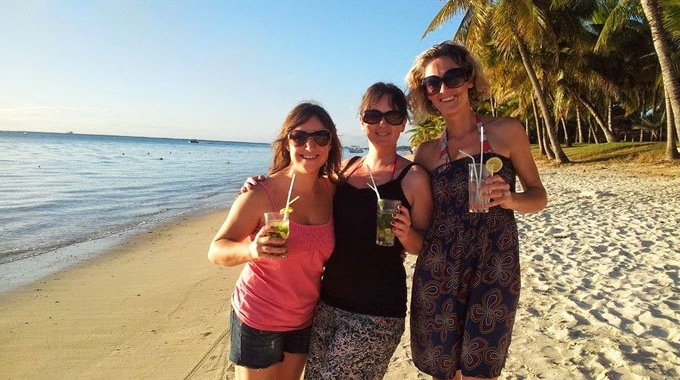 This June, Show Works took our business internationally. We had the distinct privilege, and treat, of organising NBCUniversal’s “Entertainment is Universal” Event in Mauritius, to showcase their channels to top African journalists. The event was a rip-roaring success and a “banging party” (overheard on the dance floor) which gave guests a truly immersive brand experience. Each channel was represented by an activation of it’s own: an E! Red Carpet arrival, a Style Network Nail Bar, a Studio Universal Photo Booth, a Universal Channel Cocktail Bar and two Latin American TV Stars, Ximena Duque and Carlos Ponce, representing Telemundo Channel and leaving guests gawking at their drop-dead-gorgeousness.

Now, writing that concise 5-sentence description of the event does not in any way hint at the lengths we went to to create said ‘banging party’ (also tweeted by a journo as #bestpartyever). Working away from home means that you can’t rely on your regular trusty suppliers, so the first task at hand was sourcing a local events company that would give their all to our event, just as much as we would. Thankfully, we found them. Adele and Guillaume from Impact were amazing, can-do people with whom we had a many a midnight up-a-ladder-threading-fish-gut-IN-THE-DARK french laugh, and if we could, we would ship them over to RSA for all our future events! Talking about shipping things over, now there is a challenge that comes with working across the water! There is this little thing called Customs and it is not your friend. In the weeks leading up to the event we had all of our branding and gifting shipped over to Mauritius and every single item encountered red tape at customs. The goods were seized for ‘inspection’ and were released in drips and drabs up until the very last second. We received the last box of goods 3 HOURS before the event began! We are indebted to the staff at Trou Aux Biches Resort for working tirelessly to get our goods from customs. Fatima, in particular, was an angel, without whom guests would have walked away empty goodie-bag handed!

Luckily we did not have any custom-related trouble on the way in, despite there being 75 sequinned scatter cushions in Sally’s bag (say that sentence five times fast!). We also carried over 150 flash drives which we sat on the plane loading with content for the journalists; picture all three of us in a row with our laptops on our tray tables, loading documents onto flash drives for the duration of the CPT -JHB flight. It was rather awkward when they served us bacon and eggs! Thankfully we got through customs without a hitch and arrived at Trou Aux Biches Resort safe and sound.

Our Busiest Month to Date

Our Busiest Month to Date August was busy. Busy, busy, busy. Busy-as-a-bee-busy. No, busier than…

Like a (Cake) Boss! This past week was a biggie in the Show Works books.…

Double Shot Latte Please May has been a month full of surprises. It started pretty…